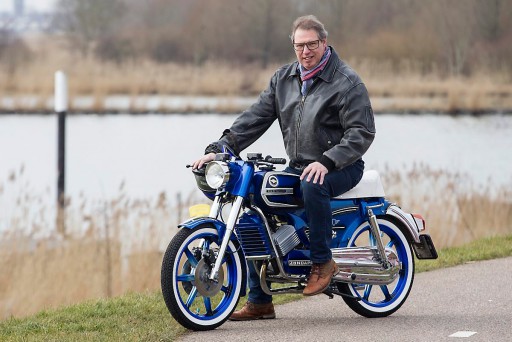 Enjoying an old Zündapp moped. “In the early 1980s I always drove my Zündapp from Dordrecht to the Guido de Brès in Rotterdam. On a simple 517 model. Not fast, but still: it was a Zündapp, "says Lennard Valk (54) from Hardinxveld-Giessendam.

The mopeds were sometimes heavily tuned up. With speeds up to 100 km / hour. Valk once collided with a teacher on the Guido at the bicycle shed. "I wasn't paying attention."

Theft of his moped from the salvage at the end of 1981 brutally ended his hobby. However, the Zündapp feeling continues to itch. "The lines of a Zündapp are so beautiful. One ascending line, from the cooling fins of the cylinder to the tail piece. Very well proportioned. ” In 2008, Valk purchased a 1973 517 that has stood still since 1986. A liquid-cooled 49.9 cc two-stroke with a five-speed engine. "Those original Zündapps are the model of an era."

In the Netherlands, around 24,000 Zündapps are still registered. Valk, a member of the Zündapp Veteranen Club (ZVC), mainly uses his moped for pleasure rides. He often drives about 80 kilometers on ZVC tours. "I am happy to participate. Awesome. Driving a nice route and having a drink on a terrace. ”According to him, the mutual bond between Zündapp riders is special. „You seek each other out and help each other where necessary and possible. Really a social event. "

Valk often meets the nicest people on the way on his moped. "People often start a conversation when you are waiting in front of the traffic light or a bridge."