Read or share questions / experiences about Klotenstoter C50Sport? Join the discussion on our Forum! 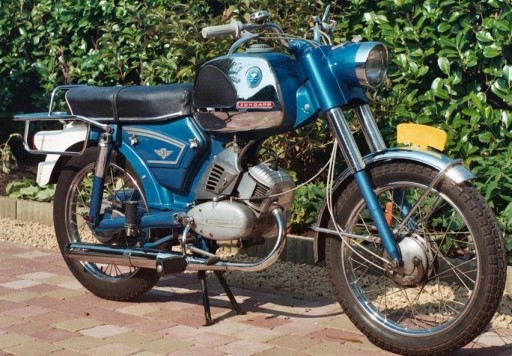 
Every Zündapp enthusiast knows this model under his nickname: the Klotenstoter. A non Zündapp enthusiast will be surprised by this naming, but the nickname of the Zündapp 517-05 sounds familiar to us. This forced cooled model with 3-manual operation on its 266 block is also known under the dutch nickname: "De Achtenzestiger", after the first year of construction. In 1968 the Zündapp 517-05 was presented to the buyers and its high, fat petrol tank was not always found very nice. In 1967 the Zündapp models still had the anniversary tank and this high tank was a novelty. The high tank was regularly removed and replaced by the lower one of the C50Sport with aircooling. A large Zündapp dealer in the east of the country told me that these tall tanks were later used in the motocross world.

You can guess why he was called Klotenstoter (Ballbumper). Hard emergency stops and frontal collisions were unfavorable for posterity. This tank was only used for 2 years on the Dutch C50Sport with forced cooling.

Other models in 1968 with the high tank: