Read or share questions / experiences about 517-35 Liste 0 GTS-50 Sport? Join the discussion on our Forum! 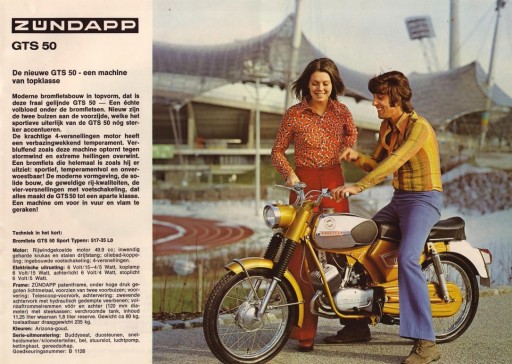 
The 517 GTS Sport with its 4-foot switched engine was a big attention magnet. Where the CS-50 and the GT-50 still had the chrome bushings on the front fork, the GTS50 Sport had fitted large rubber cuff covers around the front fork. Still with a crack starter mechanism, because by Dutch legislation. New were, just for the "looks", two extra frame tubes from the headset to below the engine block. These had no function, but were very nice to see.

Compared to the CS-50 and the GT-50, the GTS-Sport had a 4-foot-switched engine. Motor type 280. GTS means Grand Tourisme Sport.