Read or share questions / experiences about 517-35 Liste 5 GTS-50 Super? Join the discussion on our Forum! 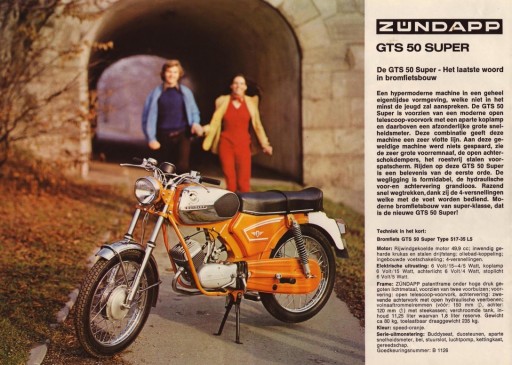 
The Zündapp 517 GTS-50 Super with its 4-foot switched engine was only available in the color speed orange. Where the CS-50 and the GT-50 still had the chrome bushes on the front fork and the GTS-50 Sport rubber covers, the Super had front rubber seals with a rubber tulle. The modern engines of that time also had that. Unfortunately, with a crank starter mechanism, orderded by Dutch legislation. New were, just for the "looks", two extra frame tubes from the headset to below the engine block. These had no function, but were very nice. New was also a separate headlight, no headlight nacelle. The rear shock absorbers had outer springs. The speedometer was mounted in the middle of the fork crown. An enviable moped.